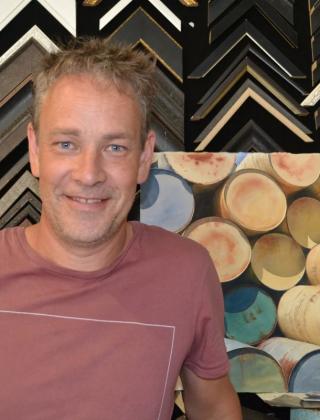 Nicholas Truscott was born in Melbourne in 1971 and raised in Bendigo, Victoria. At the age of 15 years, he began his picture framing training and art career in specialising in the medium of watercolour.

He received a Bachelor of Fine Art in 1994 from La Trobe University, Bendigo, majoring in painting and drawing. Throughout the following years, Nicholas travelled overseas to obtain inspiration and his art and style began to change and move in different directions.

Nicholas has been awarded numerous prizes for his works in exhibitions, including first prize for ‘Works on Paper’, Bendigo Art Gallery, first prize at the Otis Foundation Exhibition, Bendigo and more recently, the Bronze medal at the Camberwell Rotary Art Exhibition. Nicholas has contributed several articles to the ‘Australian Artist’ magazine and has conducted many workshops through ‘Continuing Adult Education’ and the Bendigo Art Society teaching students in the watercolour medium. He continues to teach both adults and children art in his studio in Mandurang, Bendigo, Victoria.

In conjunction with his art, Nicholas has continued to picture frame. His overseas travel provided him with another perspective in regards to modern framing and he has used this knowledge throughout his working career. Nicholas spent 10 years running his own picture framing business in Melbourne, working alongside some of Melbourne’s prominent graphic and interior designers and framing the artwork for some of Melbourne private schools, businesses and art galleries. Since moving his picture framing business to Bendigo, he continues to share close working relationships with picture framing representatives from Melbourne and is kept up to date with current framing trends.

Since returning to Bendigo in 2009, Nicholas has moved his picture framing business and art gallery to Mandurang, 10 minutes drive from the Bendigo CBD. His studio and gallery is set amongst tranquil bush surrounds and together with solo exhibitions, he continues to run exhibtitions of local and regional artists.